Back to: Navigation Endorsement

The compass is a magnetic device, points to magnetic north. The earth’s magnetic fields allow the compass to point almost towards the North Pole. The actual north pole is what we call True North.

Compasses themselves can also have slight inaccuracies caused by the actual compass or interference from things around the compass. We call this compass deviation. Each aircraft should have a small card (shown below) located near the compass that shows the deviation from magnetic north for various directions.

Since our runway directions are known prior to takeoff, you should always check your compass accuracy when taxiing parallel or perpendicular to a runway, prior to every flight, but particularly for navigational flight. 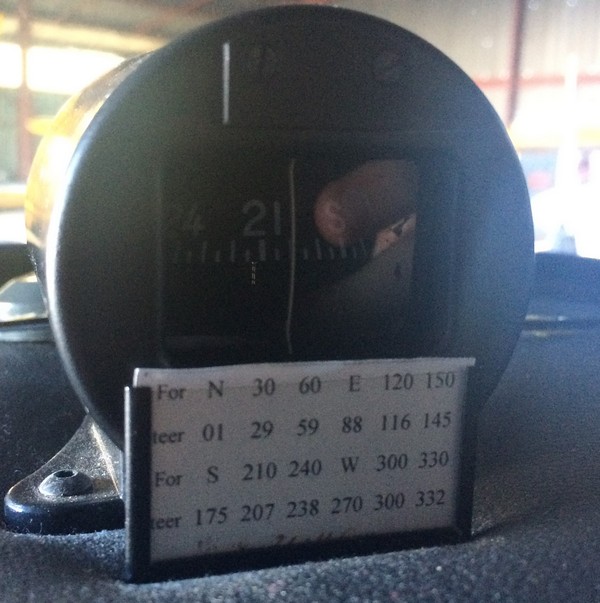 The compass will only read correctly during straight and level flight. When forces are acting on the aircraft during turns or turbulence the compass will have some error and be moving a lot.

Since a compass always points North when we accelerate or decelerate when heading east or west this will cause the compass t temporarily turn. Which way and how far it turns will depend on the acceleration or deceleration force and whether we are north or south of the equator.

In the northern hemisphere.Acceleration gives a turn to the North and a Deceleration to the South

When Across North Or South

Which Way To Turn

Due to these small nuances mentioned above, many student pilots initially struggle to turn the aircraft towards a particular heading.

Always remember that the compass stays pointing toward the North. As you turn the aircraft you turn around the compass. Use this knowledge and the clockface method below to turn accurately with ease.

Any pilot already with a licence or pilot certificate should already know clock positions, as we often use them when reporting to each other. Eg: I am at your 2 o’clock.

Another trick when beginning to fly to a compass is to use these clock face positions to make our turns much easier.

If you are heading 000 and wish to head 060 that would be two hours on a clock face. So estimate two o’clock, pick a landmark on the horizon at 2 o’clock and turn towards it, then make minor adjustments to get the exact heading. If you wish to turn 40° then turn just over one hour.

When we are pointing at East or West during a turn the compass is fairly accurate.

As we turn through South, the compass is ahead of the actual turn considerably.

As we turn through North the compass lags behind the actual turn.

Compensation For Compass Readings During Turns Through North And South

To allow for the above errors when turning through North or South  you should overshoot turns on northerly and undershoot on southerly headings.

Turning to East or West requires no under or overshoot.

This is not a real compass error, it simply makes the compass temporarily unreadable.